Yes, Virginia, there really was a Santa Claus: how cookies saved St. Nick. 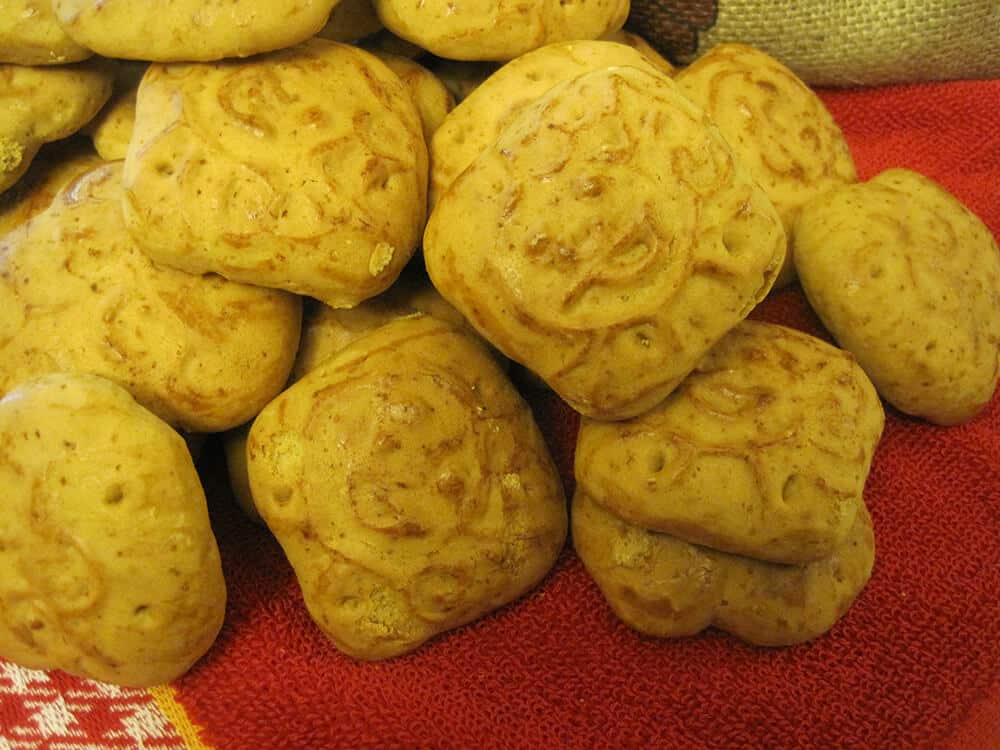 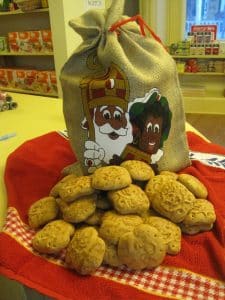 Have you ever paused to wonder why so many Dutch people celebrate St. Nicholas Day? The American version of Sinterklaas, Santa Claus is a jolly, generous soul, sufficiently non-sectarian to be acceptable to the majority of North Americans. But Sinterklaas arrives every year in The Netherlands dressed in the full regalia of a Catholic bishop. That might not seem surprising today; the Dutch are known to be tolerant and half of them who associate themselves with Christianity today are Catholic anyway. So what is so amazing about the popularity of an old man dressed in the garb of a Catholic Bishop who spreads good cheer, cookies, candies and gifts? A few years ago I was given a book, Nicholas: The Epic Journey From Saint to Santa Claus by Jeremy Seal. The story he uncovered through years of meticulous research was quite fascinating.

St. Nicholas was a bishop in Myra, Asia Minor during the third and fourth centuries; what is now modern day Turkey. He began his path to sainthood through an anonymous act of charity. A prosperous man in the city of Patara, Nicholas’ birthplace, had fallen into hard financial straits. With no money for dowries, his three daughters faced uncertain futures. As his situation became more desperate, the father resolved to sell the oldest daughter into prostitution. During the dark of night Bishop Nicholas tossed a bag of gold coins into the man’s window saving the girl from a life of abuse and slavery. The father’s finances, however, still did not improve and the second daughter was facing a similar dreadful fate. Once again a bag of gold coins came flying through the window. Finally, when the father, still impoverished, made plans for the youngest daughter, Nicholas came to the rescue again. However, this time the father pursued his mysterious benefactor and “unmasked” him. Nicholas requested a promise of secrecy. However, the “Tale of the Three Daughters” was too alluring and even today the story of generous gifts delivered secretly at night is told. Does that sound familiar….?

We do not know much of certainty about the life of Nicholas other than it was long and ended on December 6. We do know that he was not left to lay in peace. The bones of saints are valuable commodities as sources of mystical power and, therefore, also as attractions for pilgrim “tourists”. Depending on who tells the story, Nicholas’s remains were either stolen or removed from Myra to ensure their safety as the Turks began to encroach on Asia Minor at the beginning of the second millennium. In 1087, they were reinterred in Bari, Italy within the Basilica of St. Nicholas. If another chronicler is to be believed, the men of Bari were less than thorough in removing St. Nicholas’ remains. An expedition from Venice thirteen years later uncovered some left over remains. They were brought back to Venice and housed in the monastery connected to San Nicolò al Lido where they still are today. Even earlier, one of Nicholas’ fingers had been gifted to a church in Russia. Unfortunately, it was lost in the maelstrom of the Russian Revolution.

Through his own post mortum travels and those of his pilgrim followers, the generous reputation of St. Nicholas traveled far and wide. The feast of St. Nicholas was celebrated in Utrecht as early as 1163 and spread across much of northern and central Europe as well as east to Romania. Processions led by people dressed as St. Nicholas would travel through the towns. Groups of singing people would be welcomed into people’s homes. In other places, parents would give presents to their children on the eve of St. Nicholas all the while pretending that the saint himself had spirited the gifts through locked windows and doors. Most likely, as Seal says, this gift giving was inspired by plays about the lives of saints and Nicholas’ life in particular. By the 1500’s Nicholas had a faithful following and many churches had be named in his honour across Europe including The Netherlands.

In his book, “Daily Life in Holland in the Year 1566” Rien Poortvliet recounts and illustrates the tumultuous times that arose. Holland was under the control of Philip, King of Spain. Any dissent from Catholicism was violently repressed. In addition, the Dutch people were enduring a sales tax of 10 percent, high prices and a shortage of food. The church which owned much land and enormous fortunes did little to ease the people’s plight. Instead it added to the people’s burden by requiring tithes and payment for the forgiveness of sins. History teaches us that whenever Christianity has lost its simple message and become politically institutionalized, trouble follows. In the Low Countries, Spain and the Catholic church were seen as wicked bedfellows. On August 10, 1566 the people rebelled beginning what has been called the Iconoclastic Movement. Four hundred churches and cloisters were attacked. Religious artifacts and images were desecrated and destroyed. In the aftermath, churches that were once named to honour saints were renamed “old” and “new”. Catholicism went underground. Nicholas’ church in Amsterdam also fell victim to these desperate times. His faithful followers would continue to meet secretly in a stocking maker’s house on Volburgerwaal. It wasn’t until1887 that a Church of St. Nicholas would be once again dedicated in Amsterdam and Catholic Christians could worship openly. A year later the church in the attic on Volburgerwaal was reopened as the Museum Amstelking  making it the second oldest museum in Amsterdam after the the Rijksmuseum.

How did St. Nicholas, by then known as Sinterklaas in the Low Countries, survive the upheaval of the Reformation to remain such a beloved figure in Dutch culture? Perhaps his reputation of generosity guarded him from being associated with the abuses of the church. Perhaps his feast day had just been too much fun. Whatever the reason, we do know that Sinterklaas flourished in secret. 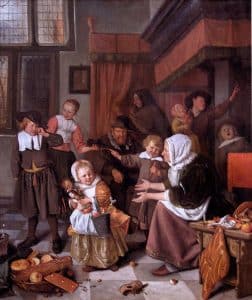 “The Feast of St. Nicholas” by Jan Steen circa 1665-1668. Oil on canvas in Rijksmuseum, Amsterdam

While the people destroyed the images of the saints in the churches, Sinterklaas was safely hidden in their homes but not in the form of golden statues or painted icons. Since the thirteenth century bakers in the Low Countries had been making “taai taai” honey anise cookies in the saint’s image; complete with all the trappings of his bishopric. Numerous cities and towns passed ordinances outlawing the baking of cakes and cookies in the form of his image but Sinterklaas was not to be repressed. He was the people’s saint and they continued to honour his heritage of generosity. If you look carefully at Jan Steen’s painting, “The Feast of St. Nicholas” you will see a small girl holding a taai-taai cookie in the form of Sinterklaas near the back of the scene. Painted between 1665-68, a century after the Iconoclastic Movement, Steen documents that Sinterklaas was not forgotten but still faithfully remembered by the average person. As the authorities continued to try to outlaw him, his abilities to elude the authorities grew to epic magical proportions.

St. Nicholas’ heritage of gift giving has survived. However, it has lost its simplicity and anonymous intent. His iconic image has been replaced in much of the world by jolly old St. Nick. Even in The Netherlands, non-sectarian Santa is making inroads on his religious forefather. Perhaps, ironically, it might be the attack on Sinterklaas’ helper Zwarte Piet that might save Sinterklaas from a new iconoclasm…although Piet himself might need to become Roetpiet (Soot Pete) to survive. The Zwarte Piet controversy reminds us of the enduring value of iconic figures of simple generosity.

So this Christmas, take a close look at that taai-taai cookie before you sink your teeth into its anise honey goodness. Chances are it still has been baked in the shape of Sinterklaas or Zwarte Piet. Give some thought to the story of “The Three Daughters” and St. Nicholas’ anonymous brand of “Love Thy Neighbour”. Take a break from the shopping mall, sit down and tell a child about a man centuries ago who saw his neighbour in distress and did something about it. Plan your own act of anonymous love. If we all band together, Sinterklaas will survive a few more centuries.