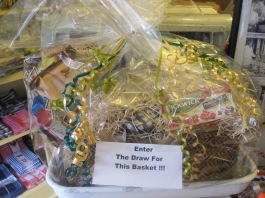 A very happy girl, and her sister picked up her gift basket today. Kendra’s name was pulled in our anniversary gift basket draw.  I’m sure she will be sharing her winnings with the rest of the family but she got to pick out a special towel which will be just for her…as she told her sister!

Our thanks to Pastor Andrew of the local Welland Brethren in Christ Church for doing the honours and pulling the winning name.

Check out our new line of DDDDD tea towels and hand towels that just came in.  And don’t forget that we make beautiful custom gift baskets.  Put a smile on someone’s face today…or surprise them soon for Christmas! 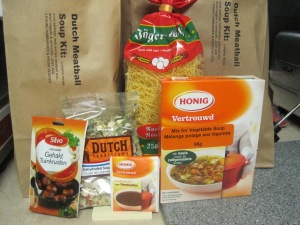 Hankering for some traditional Dutch meatball soup but not sure how to begin?  Pick up one of our Dutch Meatball Soup Kits. They contain all those secret herbs and spices that even the Colonel doesn’t know about.  All you have to add is a pound of hamburger, water and maybe some fresh veggies.

OR here is the recipe:

Keep water at a simmer but do not allow it reach a rolling boil. If broth is allowed to boil too vigorously fat will emulsify making it difficult to skim off. When all the meatballs have made continue to let broth simmer as you chop the vegetables. Quarter the larger parts before chopping into 1/4 inch thick pieces. Remove broth from heat and allow fat to raise to the surface. Remove herb sachet. Skim off top layer into a large measuring cup or bowl. Refrigerate. Remove fat when it becomes a solid mass and return the extra broth to pan.  Broth will cool faster in a glass or metal container.

Return broth to heat. Add chopped vegetables and bring soup back to a boil. Reduce to a simmer and cook until  vegetables are tender. Dissolve soup mix in refrigerated broth or cold water and add to soup. Vermicelli should be added 7-10 minutes before serving depending on cooking time.

Even before I knew that my father walked the same streets in Delft as a child that Jan Vermeer had, or that my ancestors arrived in Delft around the time of Vermeer, I was captivated by his paintings. In particular “The Milkmaid” acted as an inspiration for the logo I created for our business.

There has been much discussion and research into the question of how much technology Vermeer used in the creation of his paintings.  Scrupulously perfect in perspective, meticulous in detail, rich in colour and tones, Vermeer’s works set a standard that few artists can achieve. Therefore, the issue of whether he “cheated” to achieve his results is more than an esoteric question. It relates to almost every artist’s personal sense of ability.  The issue also pivots around the fundamental question of what is art.  People will ask me how I render a picture onto a canvas or paper: Do I use a projection device? Do I use a grid? I have been chagrined to discover that for many people any use of technology diminishes a piece of artwork in their minds.  The composition, interpretation and translation of line and colour are disregarded if any use of technology is admitted to.  For some even the use of a ruler or square offends their sense of artistic purity.

So back to Vermeer; I just finished watching the fascinating although rather geeky movie, Tim’s Vermeer.  If indeed Vermeer did use a camera obscura or lenses and mirrors to render his paintings, does that diminish his craft and ability?  Should those of us whose Dutch pride has been stirred by his paintings, slink off in shame because his painting are not what they seem? I would argue the contrary.  We live in an era of great dependence on technology.  Unlike Vermeer, I do not grind my own pigments and mix my paints.  I go to Michaels.  I don’t stretch my own canvases, although I would like to learn how.  I go to Michaels. I am not limited to working in natural light.  I can find images from all over the world with my finger on a touchpad and thereby benefit from the compositional eye of photographers I will never meet.  I blow up those images on my scanner or reduce them to pixels to analyze the underlying colours. Baring an artificial restriction to primitive materials, it is impossible to separate art and technology today.  In fact, technology has become our new paint brushes.

Vermeer painted in a golden age of discovery.  There was no dividing line between science and art. As he ground his pigments and mixed his paints, he acted as chemist as much as an artist.  If he used lenses and mirrors, as he probably did given the details in some of his paintings that would have been difficult to see with the naked eye, he wasn’t taking shortcuts.  Anyone who has knowledge of Vermeer knows how slowly he painted.  Rather he was experimenting with how to better convey an image on a canvas.  Vermeer predated the Impressionists and Pointelists. He knew nothing of pixels. He knew nothing of photographs.  Lifelike images were an unknown standard. Yet he understood that the artist’s application of dots and lines fools the viewer’s eye to see lifelike images  with light bouncing off the subjects. He upped the standard of what could be achieved by the application of paint on a canvas.

So proud of Vermeer?  We should be! Not just those of us whose families hail from Delft, not just  people of Dutch descent; not just Europeans. No, as fellow human beings in the pursuit of beauty, we can relate to Vermeer and be amazed at the human need to not only discover continents but to explore the smallest details of creation. We can marvel in the complexity of creation and that it takes all of humanity, including scientists and artists, to begin to fathom its beauty and communicate that to our fellow travelers. 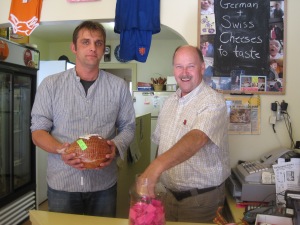 Steve and Arie of Schep’s Bakeries pulled the winning name for our Thanksgiving Ham draw.  Congratulations Elsie! Thanks to Wagener’s Meats for donating the Polish ham for our draw. We are now taking names for our $50 gift basket draw.   Come in on Saturday and enjoy sampling German and Swiss cheeses plus an assortment of meats and sausages. 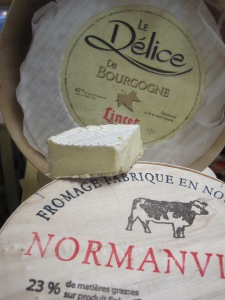 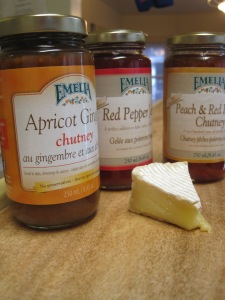 Make your brie happy with these preserves. We’ve tasted others but Emelia all natural preserves won the pick.  The red pepper jelly is loaded with chunks of red pepper.  Not surprising since these are fruit first products with no preservatives. But don’t stop when the brie is eaten, try them with ham or turkey.  Or what about on your cream cheese bagel?!  The Apricot Ginger Chutney will give your chicken zing. The Peach & Red Pepper Chutney recipe boasts a 200 year family heritage. Your cheese will never be happier. 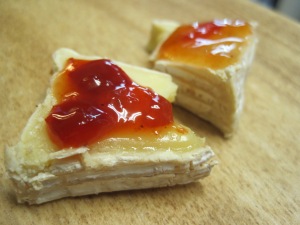 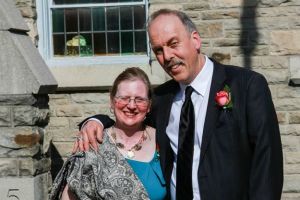 This month, October 2014,  John and Jacqui Eisen are celebrating a family milestone: 50 YEARS!  No, not 50 years of marriage but 50 years since the family first entered into the European import trade.  Although they started their business, The European Pantry, back in 1997, the roots of their business had their genesis in 1964 during a time of tragedy and hardship for John’s parents, John A. W. & Trudy Eisen.

When John A. W. Eisen arrived in Canada in 1949, the world looked full of opportunities to his teenaged eyes.  Although that did not mean the opportunity to finish high school, after 5 years of hard work he was able to enroll as a mature student in university with the dream of helping people.  The early 1960’s found John A. W. in Renfrew, Ontario embarking on a career as a social worker to support his wife Trudy and young son, John Jr.   But his dream turned into a nightmare when he began to have difficulty walking and climbing stairs.  Already during his student years he had often felt fatigued but had blamed that on long hours of work and study.  Now he could no longer deny that something was terribly wrong.  Eventually he would be diagnosed with Multiple Sclerosis.  As a social worker it had been his job to assist disabled workers.  Now, no longer able to work himself and having to rely on a wheelchair for mobility, he and Trudy had to find a new way to support themselves.  This is how The Wooden Shoe was born in 1964 and they found themselves selling Dutch imports to the immigrant community in the Ottawa valley 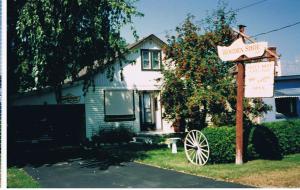 Although he didn’t realize it, John had been training for retail business for many years.  As a young lad he had raised rabbits for sale.  He had also shown early entrepreneurial aptitude during the war years earning money by standing in ration queues for people who didn’t have the time.  Even though the money he earned usually ended up helping his widowed mother put food on the table, he learned an early lesson in purchasing and providing services to consumers: focus on what people need. John and Trudy always kept that in mind at The Wooden Shoe.  They also had a reputation for giving back to their community. Over the years, John  contributed to many publications, such as To All Our Children,  that paid tribute to the Dutch immigrant experience in Canada.  Having lost the use of his hands, he did this by typing on one key at a time with a head device that Trudy had crafted for him.  His children and grandchildren were recipients of many letters that recorded his experiences as a child during the troubled war years and subsequent challenging ones of immigration. 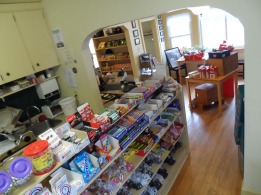 Like his father, their son, John Jr., graduated with a BA in sociology and worked as a social worker but growing up in the family business left a nagging desire to run his own business.  As his parents planned their retirement in 1997, John and his wife, Jacqui began a similar venture in Welland, Ontario. Today that business, The European Pantry, has expanded well beyond serving the Dutch community.  They offer a broad line of European imports and their selection of both domestic and imported cheeses boasts over 50 choices. The commitment to meeting people’s needs and giving back to the community that John Jr. saw modeled by his parents, however, remains strong to this day.

John Sr. passed away in 2001 and Trudy in 2008.  Their memory continues to be honoured by their children who value all they learned from these remarkable individuals. John and Trudy carried by their strong faith in a God who sustains no matter what life throws at you, turned adversity into something positive. 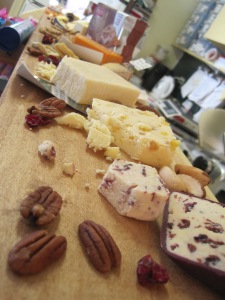 Fiftieth Anniversary celebrations starting September 27 will continue throughout October with draws for items like a Polish Ham for Thanksgiving, a $50 gift basket and a cheese platter.  Each Saturday, a 6 foot cheese board of samples will  tempt you to find your favourite. Learn about pairing cheeses with wines and beer. Each week a different group of cheeses will be show cased.  On September 27, eleven British cheeses demonstrated the variety available from the fair isles.  On October 4, experience the cheese culture of France and Quebec. This will be followed with German and Swiss cheeses on Thanksgiving weekend.  The month will be rounded out by Scandinavian specialties on the 18th and finally a special Dutch day on the 25th will honour the memory of John A.W. and Trudy first foray into European imports all those years ago. 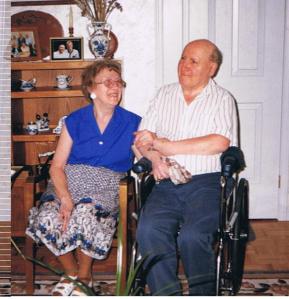