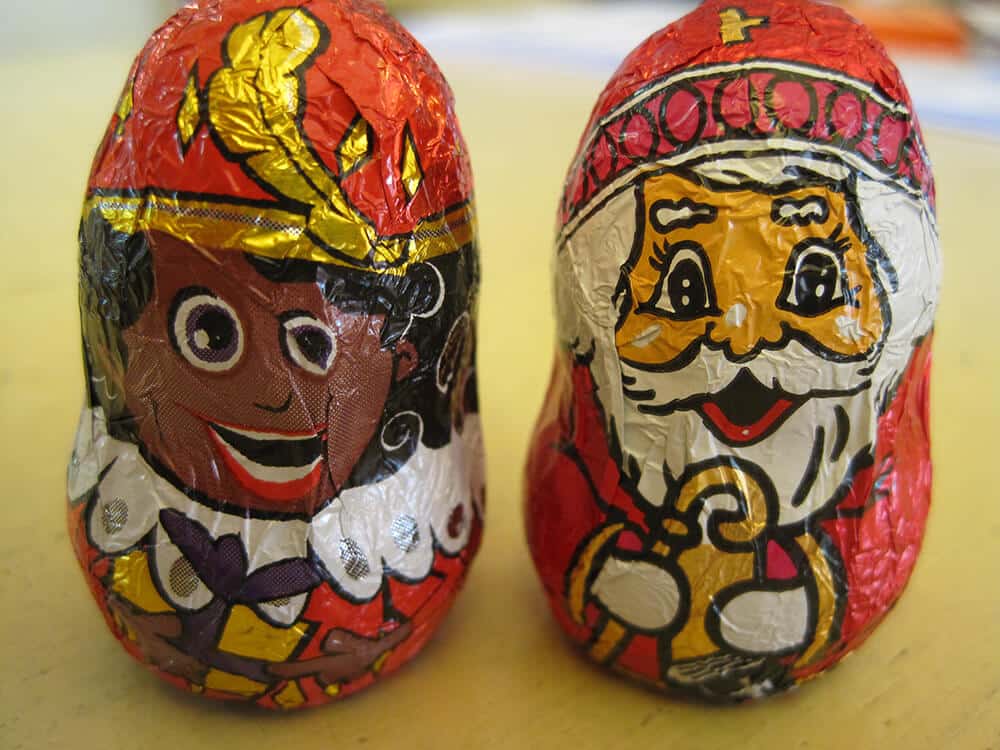 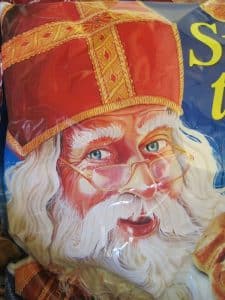 Tomorrow is St. Nicolas Eve.  In The Netherlands and around the world children of Dutch heritage will be setting out their wooden shoes.  They will be going to bed not with visions of sugar plums dancing in their heads but rather of pepernoten, taai-taai and chocolate letters. Yet in the larger world the feast of St. Nicolas is not conjuring up images of innocent children snuggling into bed with excited anticipation of tomorrow’s festivities but rather accusations of racism centered on the character of Black Peter.  All this makes me wonder if in all the controversy we have forgotten whose feast it is.

It is interesting that the Dutch people so known for their tolerant ways are remaining stubbornly ethnocentric on this point. I myself come from a family that crossed racial lines a long time ago. My blue eyed, blond haired Aunt Elsie married Uncle Ak, a Japanese Canadian back in the 1960’s already. I also have cousins of Nigerian and Jamaican heritage. I anticipate the arrival in March of a grand-daughter who I hope will be as proud of her father’s Iraqi heritage as her mother’s Dutch roots. Therefore, I suspect that behind all this resistance to change isn’t so much racist bigotry as the influence of several well-known Dutch characters known as kwajong, Meneer Woodenhead and Mevrouw Eigenwijs.

Most of us have heard the phrase: wooden shoes, wooden head, wouldn’t listen.  It describes many old Dutchmen that we know who resist any argument that might precipitate change.  You have also probably met some kwajongen even if you didn’t realize.  A kwajong is a mischievous boy who likes to pull monkey tricks. But it also describes someone who acts contrary just for the fun of it.  I have been surrounded by wooden headed kwajongen all my life. I know the tricks they are usually up to. And not to deny Dutch women a place, how many of us haven’t been called “eigenwijs”? I certainly have been called that when I have acted like I knew better than anyone else. So given the Dutch character(s) I am not at all surprised about the “push back” that is happening about Black Peter not just in The Netherlands but also among Dutch Canadians. But in all of this I think we have forgotten what St. Nicolas Day is all about. 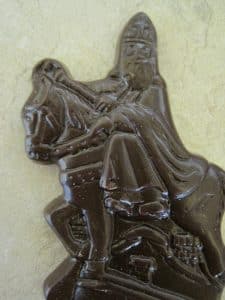 The veneration of St. Nicolas can be traced back for more than 1000 years. Christmas caroling door to door and the mysterious, mythical appearance of gifts all have their origin in the traditional celebration of St. Nicolas’s feast day. In The Netherlands the saint is known as Sinterklaas. When I was growing up it didn’t matter if you were from a Dutch Catholic, Protestant or atheist family…everyone celebrated Sinterklas. How that came to be is explored in our article “The Amazing Survival of St. Nick”.  Black Peter or Zwarte Piet as he is known in The Netherlands never showed up in print until 1850 when a poem by an Amsterdam schoolteacher Jan Schenkman: Sint-Nikolaas en zijn knecht (“St. Nicholas and His Servant”)  was published. The Zwarte Piet tradition can be traced back to the early 19th century but doesn’t have the same old roots as St. Nicolas. One theory traces Black Peter to German myths. St. Nicolas’s white horse is not part of the original Christian tradition but is believed to have been derived from the myth of the German god Oden who traveled through the skies on a white stallion. In the Oden myth, the god is accompanied by several black ravens. In real life, St. Nicolas was a bishop of Turkey who never saw the shores of Spain, may never seen a Moor and was unlikely to have had a slave considering his compassion for the poor.

Today Sinterklaas’ popularity has extended beyond Christendom to people of other cultural and religious heritages.  In a Cafebabel article says:

Like many EU countries, the Netherlands has recently seen shifting demographics due to sustained immigration from countries such as Turkey and Morocco. To gauge the appeal of Sinterklaas among these newcomers, a number of Dutch-born high schoolers with one or more immigrant parent were asked for their thoughts. Of fifteen respondents living in the suburbs of Amsterdam and The Hague, ten were raised muslim, one was raisedhindu, and four grew up in non-religious households. Regardless of religion, the teenagers all confessed to believing in Sinterklaas as children, and all of them celebrated at school. Over half of the muslim-raised respondents even reported celebrating Sinterklaas with their families at home, in spite of islam’s prohibition against the observance of non-muslim holidays. Despite its roman catholic trappings, all but one of these students viewed Sinterklaas as a nonreligious cultural celebration. http://www.cafebabel.co.uk/society/article/sinterklaas-and-black-petes-multicultural-evolution-in-netherlands.html

Sinterklaas has become everyone’s saint. In spite of his “sectarian origins” he has universal appeal. I believe his survival of the Reformation and his appeal to so many people is rooted in the generosity that he represents. In a world reeling from news reports of terrorist attacks and sectarian war, we have this figure who reminds all of us to be a bit more gracious. I don’t think we should forget about Black Peter but perhaps in all the uproar about him we have forgotten what the feast of St. Nicolas celebrates:  the life of a man who gave generously to the poor without wanting any thanks. Black Peter is a fun character whose medieval page costume is bright and extravagant. He doesn’t need  blackface to maintain his appeal. A few smears of soot will do the job. Perhaps it is time we all gave a bit.